On May 5th, 2017 the Hellenic Air Force retired its last RF-4E’s, the reconnaissance version of the F-4 Phantom. In more than one aspect, this meant the end of an era.

With the retirement of the HAF RF-4E ‘photo-Phantom’, the last dedicated photo reconnaissance aircraft have disappeared in Europe. In European air forces, the recce task has been taken over by either drones or aircraft fitted with reconnaissance pods. The withdrawal  of the RF-4E also means the end of the film: it was the last recce aircraft in Europe fitted with ‘analogue’ (wet film) cameras.

On Thursday, May 4 the Hellenic Air Force organised a “spotter day” for some 600 people at Larissa airbase. From all over the world, photographers had travelled to Greece to bid pharewell to this classic fighter aircraft. The three last remaining RF-4E Phantoms flew in formation and taxied past the gathered crowd. For the occasion, one Phantom had received a special livery. A second Phantom was still wearing jubilee colours from the squadron’s 60th anniversary in 2013. The youngest of the three aircraft was wearing its original camouflage scheme, similar to the USAF Phantoms in the ‘70s and ‘80s.

Friday, May 5 was the day of the official ‘Pharewell ceremony’, which was accessible to the general public. Hellenic Air Force staff and several thousands of people had come to the airbase for the official retirement ceremony. After the official ceremony and speeches, the three Phantoms flew past in formation with an F-16 and a Mirage 2000. A final flyby by the three Phantoms marked the end of operations for 348 MTA and the RF-4E. Lt.Col. Stavros Antonopoulos, 348 MTA Operations Officer, steered Phantom 7499 with the special livery to the platform near the crowd. 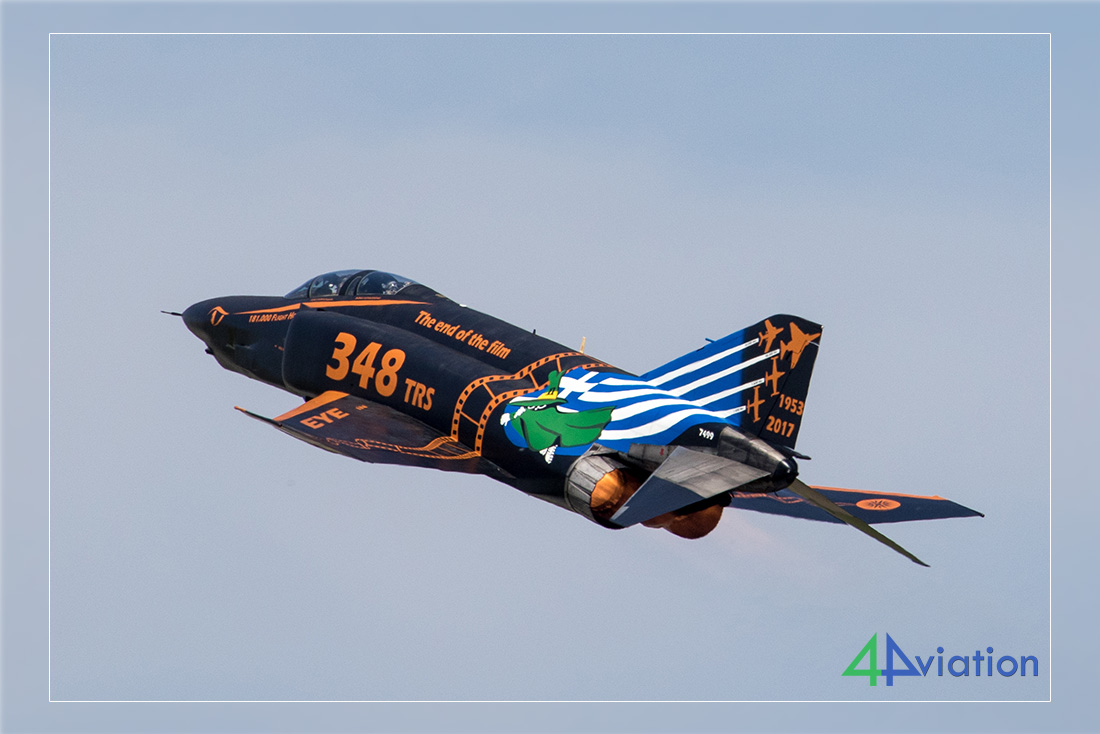 Late 1970s, the Hellenic Air Force received eight RF-4E Phantom reconnaissance aircraft, as part of a large order of F-4 jets with McDonnell Douglas. The RF-4s entered service with 348 MTA (‘Mira Taktikis Anagnorises’, or Tactical Reconnaissance Squadron). In the early ‘90s some twenty former German air force RF-4Es were added to the Greek reconnaissance fleet. A total of 27 aircraft were handed over, of which seven never entered service. These were used as spare parts source. The ex-German Phantoms retained their green-and-black camouflage, but this was not the only difference. Because of differences in wing design, flight characteristics of the two subtypes were not identical. Additionally, the ‘German’ Phantoms were true ‘twin stick’ aircraft and could also be flown from the back seat. This was not the case in the ‘American’ RF-4s, in which the back seat was designated for the WSO/navigator.

In the recce Phantom’s nose, there was space for four removable cameras. Depending on the mission, different cameras could be installed that could photograph forward oblique, sideward oblique and straight down. It was possible to take detailed photographs even form a high altitude (up to 50.000 feet).

Lt.Col Ioannis Noulopoulos has been an RF-4E pilot for the whole of his active career in the HAF: “After my flight training, I went straight on to the RF-4E Phantom. I have 21 years of flight experience on the RF-4E, gaining over 2100 flight hours.”

What lies ahead, is still a mystery. Lt.Col Noulopoulos: “For me and most of my fellow pilots, the next posting is still unknown. Some of us may transfer to the F-4E at Andravida, others will go on to the F-16. Maybe some will change to flying transport or become an instructor. We will see!”

Although the primary task for the RF-4E was reconnaissance, some could be equipped with AIM-9 Sidewinder missiles for self-defence. Practicing BFM (Basic Fighter Manoeuvres) was therefore a regular part of 348 MTA’s flight missions. Lt.Col Noulopoulos explains: “My ‘Phinal Phlight’, my last flight on the Phantom, was a BFM mission against F-16’s. This took place in April, and it was a memorable flight. It was tough, as the F-4 is not really a match for the F-16 in a dogfight.”

The retirement of the RF-4E also means the end of 348 MTA, the only dedicated reconnaissance squadron in the HAF. Since 1953, the squadron has accumulated 181.000 flight hours on four different aircraft types, of which about half on the Phantom. Which squadron and aircraft type will take over the recce mission is yet unclear. Greece does have several DB-110 reconnaissance pods, a very advanced digital recce pod that can be carried by the F-16. 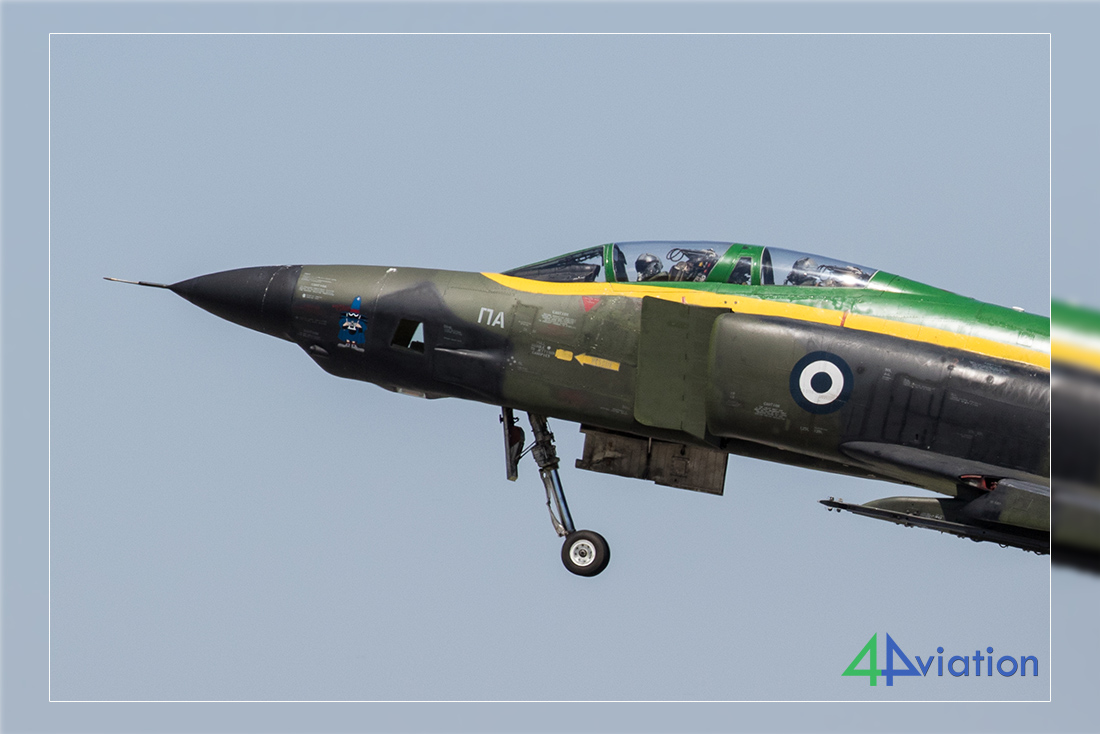 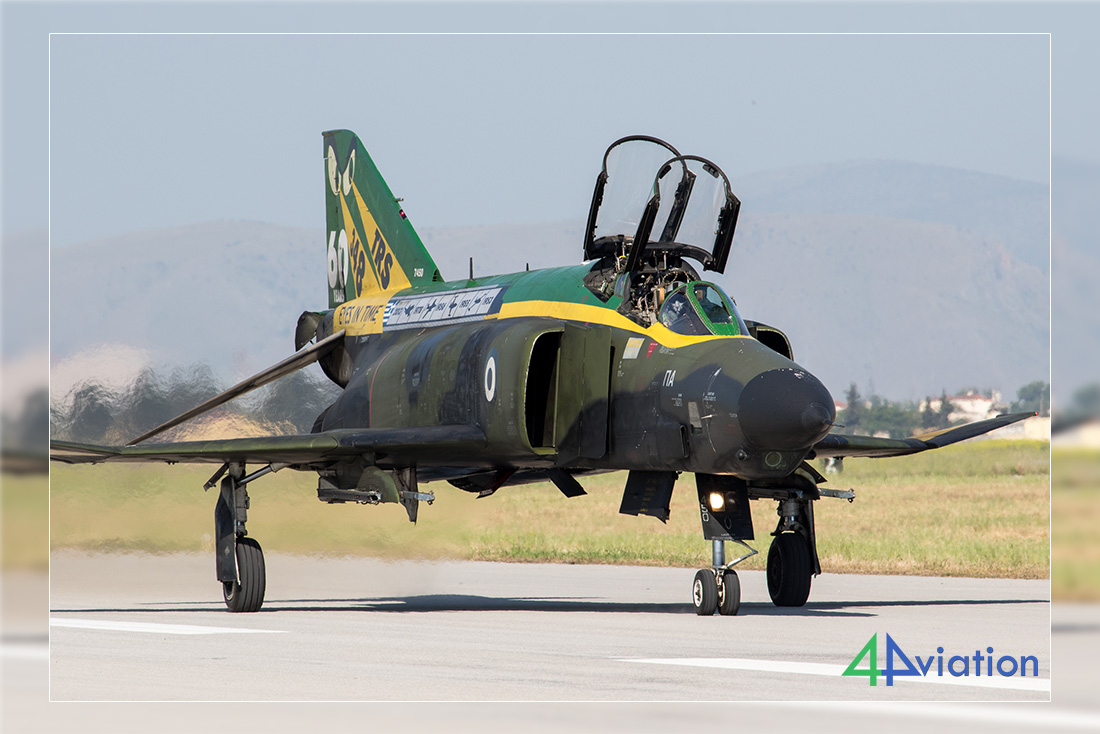