With the recent arrival of six A-29 Super Tucanos, the Lebanese Air Force (Al Quwwat al-Jawwiya al-Lubnaniyya) has added a very potent little devil in disguise to its inventory. Combined with their AC-208 Combat Caravan the fixed wing component of the small air force has become relevant and up-to-date. Quite an achievement for a country that needed many years to recover from the civil war.

On 28 May 2018 four A-29B Super Tucanos arrived at Hamat Air Base, North of Beirut. Their delivery, two months ahead of the original schedule, marked the completion of the delivery of a group of six of such aircraft for the Lebanese Air Force.

Operating from Hamat Air Base, 7 Squadron received its first two A-29s in October 2017. The Jacksonville built aircraft are flown by former AC-208 pilots that have undergone training with 81st Fighter Squadron at Moody AFB (Georgia). The first Lebanese Super Tucano pilot completed the first training flight in March 2017. The delivery of the final four aircraft came just days after the graduation of the second class at Moody AFB.

With an endurance of up to 90 minutes (depending on configuration and fuel) and flying from Hamat the aircraft can reach the furthest point in Lebanon and still have 35 minutes playtime left. Although the Tucano can easily operate from austere airfields, the home base of Hamat currently has some limitations that need addressing sooner or later; the absence of a parallel taxiway, night and IFR capabilities. A public road crosses the runway which can affect flying operations.

While offering low operating cost, the Super Tucano can pack a serious punch. With bolt-on armour plating and flare dispenser for self-defence, the aircraft can carry a payload of 1500 kilograms. The Lebanese Air Force is able to employ two M3M .50-inch machine guns, 70mm rocket pods (for Hydra and APKWS [laser guided]), Mk81 (250lb) and Mk82 (500lb) unguided bombs and GBU-12 and GBU-58 laser guided bombs. The LAF uses the FLIR Brite Star DP system for intelligence, surveillance, and reconnaissance (ISR) and target designation. All in all, the aircraft offers Lebanon state-of-the-art counterinsurgency (COIN) capabilities, the Advanced Precision Kill Weapons System (APKWS) being one of the major items. While there is a requirement for six more A-29Bs, currently there is no sign of them being acquired any time soon.

The Super Tucanos have joined the three AC-208 Combat Caravans, that operate from Beirut Air Base under 4 Squadron. The Cessnas, delivered in 2009, 2013 and 2017, are used for a variety of roles. Besides cargo and passenger transport, the more eye-catching roles are attack and ISR missions. For the latter two roles the crew consists of three, two pilots and a Mission System Operator (MSO). For attack mission the aircraft carries the AGM-114 Hellfire II missile (one under each wing). The long endurance and low operating cost make this type another valuable asset in the LAF.

Considering that the Lebanese Air Force withdrew its last Hawker Hunter aircraft in 2014, the Super Tucano and Combat Caravan can be considered as up-to-date fixed wing replacement aircraft. Some Hawker Hunters had only been brought back to life in 2008, after the need for fixed wing aircraft had first become apparent during the Nahr al-Bared operations in 2007 (see later).

Three, of originally six, Scottish Aviation Bulldogs have been restored to flying condition around 2008, making up 1 Squadron at Beirut Air Base. These aircraft, initially put in storage in 1995, are being used for training purposes. 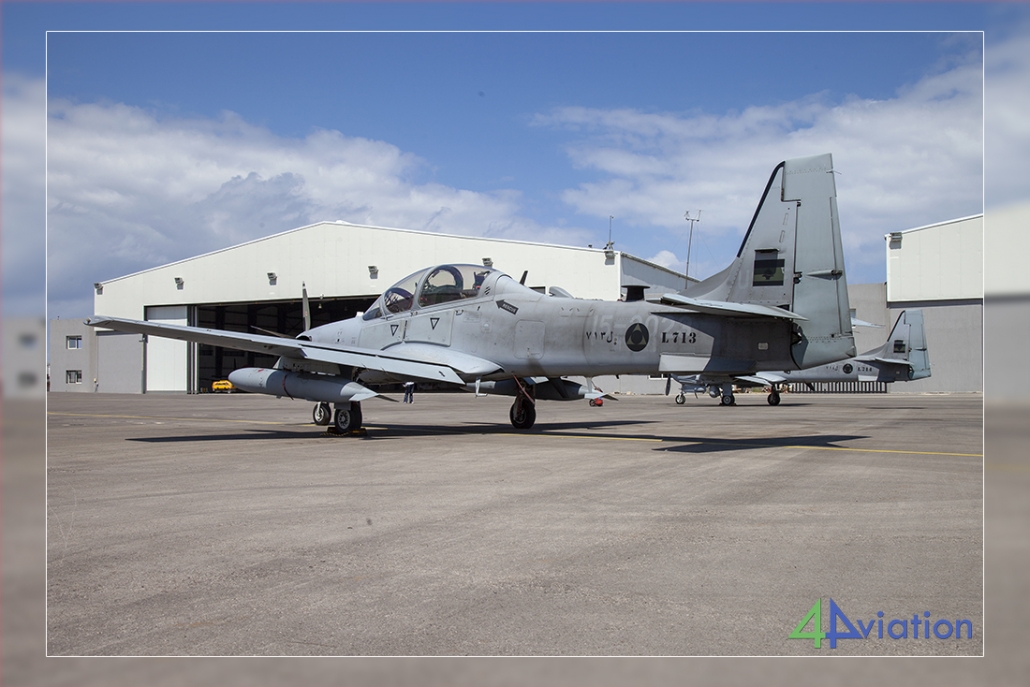 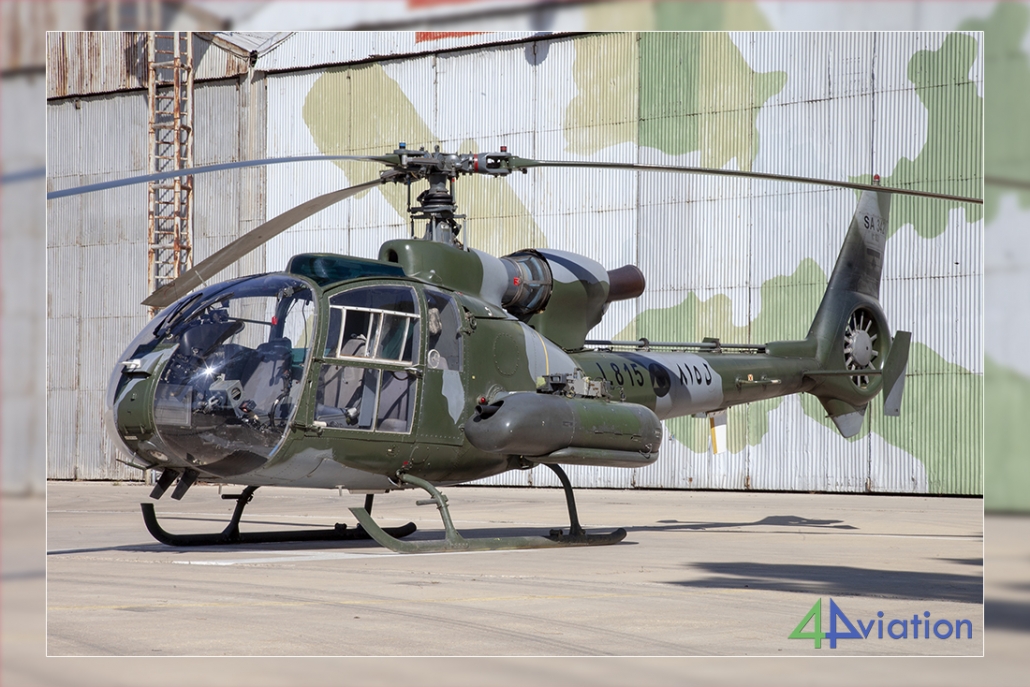 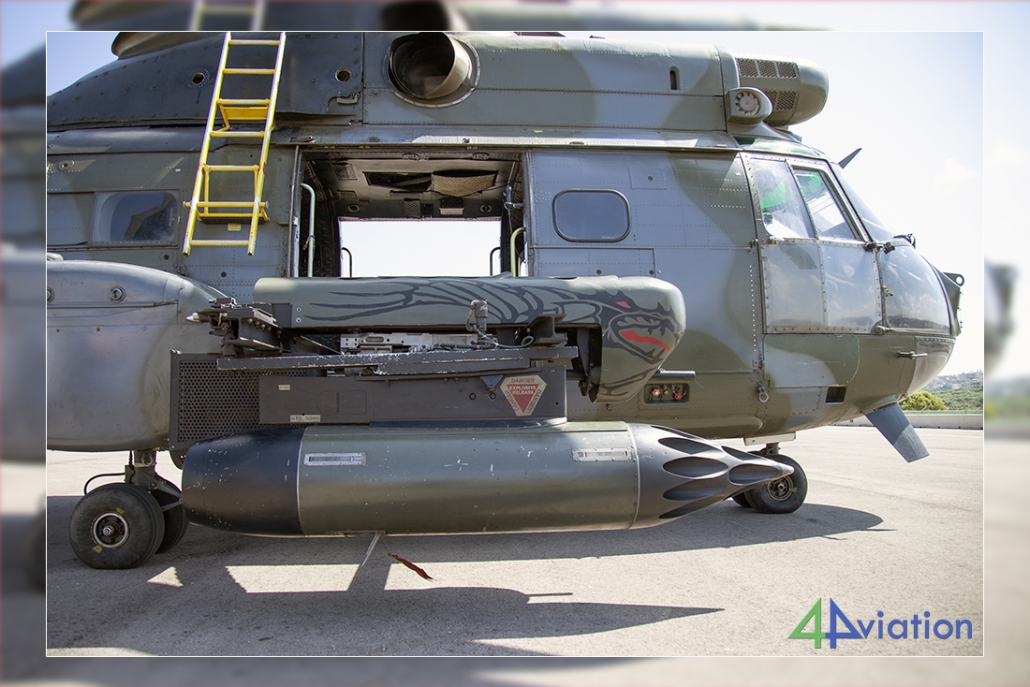 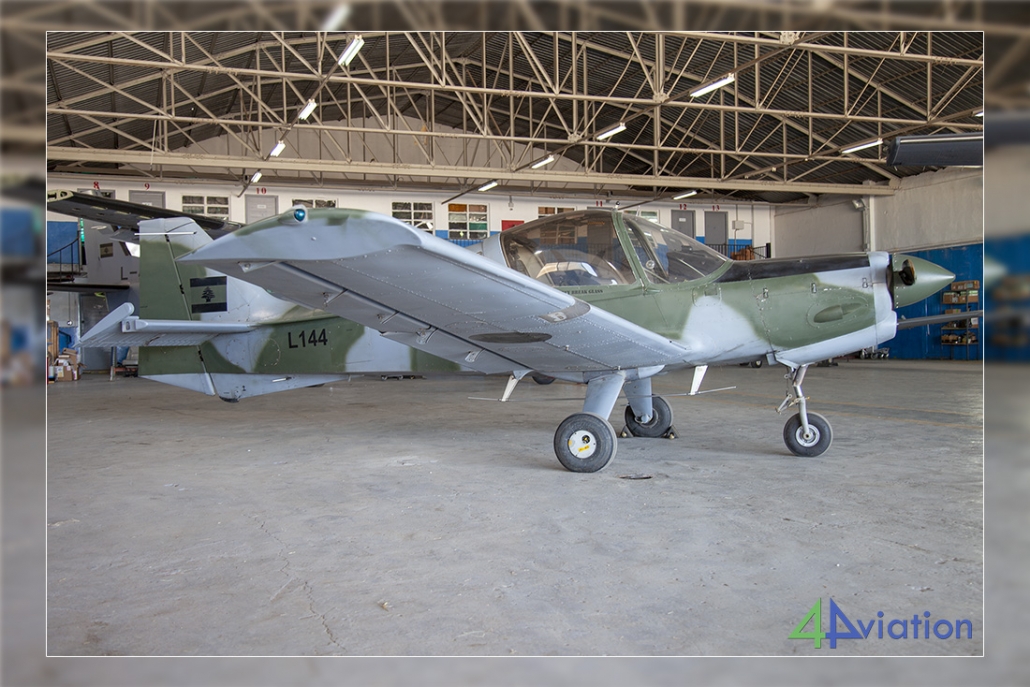 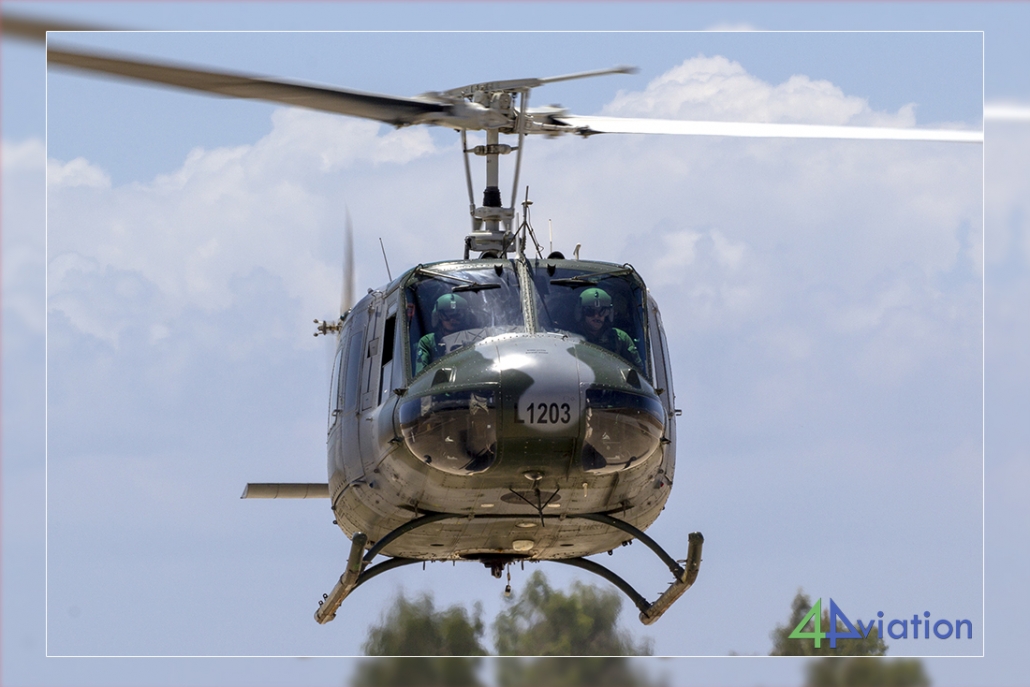 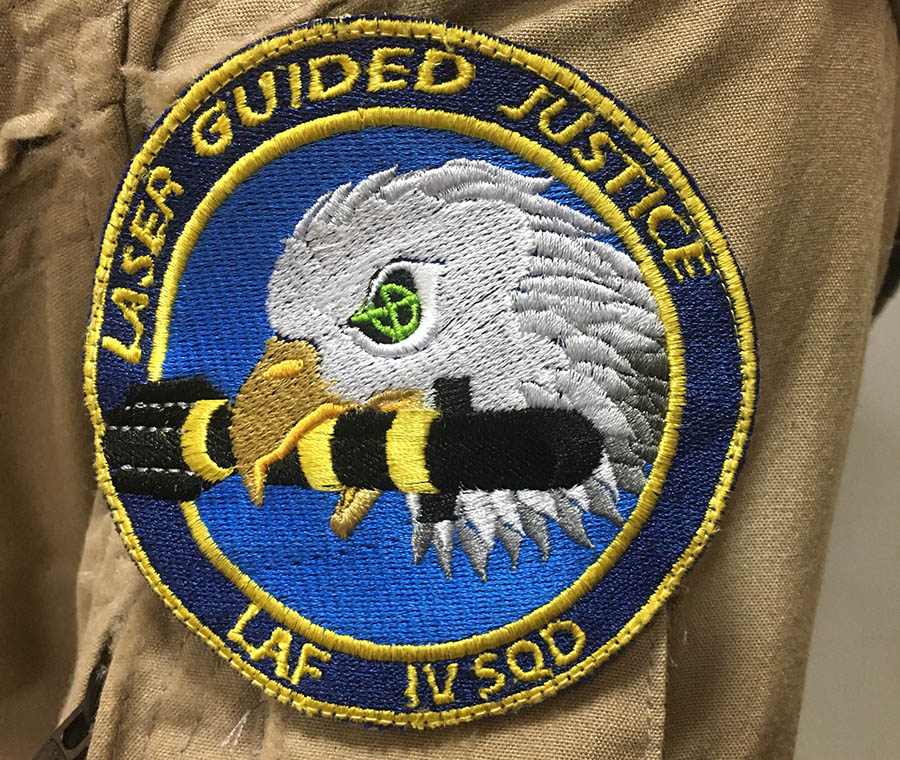 After the Lebanese independence from France, rather the end of the Mandat Pour La Syrie et le Liban, on 22 November 1943 it took almost six years for the Lebanese Air Force to be established on 10 June 1949.

The LAF consists of roughly 200 officers and 1050 personnel. The headquarters is located in Beirut, while four air bases are in use. The Lebanese Air Force Order of Battle currently is as follows;

The rotary wing element of the air force is made up of several aircraft types. The Caravans and Bulldogs at Beirut Air Base have to share platform space with the UH-1H IIs of 12 Squadron, the S-61As of 16 Squadron (fire fighters, funded by the Akhdar Dayem association, but operated by the Lebanese Air Force) and the single presidential AW-139 (callsign Cedar 1, donated by Qatar in 2008).

Former UAE AF IAR330SM Puma are operated by 9 Squadron at Hamat Air Base. The Puma is used for medevac, ground attack, SAR and CSAR. Both Rayak and Kleyate Air Base are helicopter-only bases. Rayak is home to 8 Squadron (SA342L Gazelles in the attack role) and 15 Squadron is the training unit (operating the R44 Raven II and UH-1H), while 14 Squadron at Kleyate operates the UH-1H.

The Huey and Huey II are the most versatile choppers of the air force. They can used for a long list of various tasks (troop transport, VIP transport, crop spraying, firefighting, medevac, etc.).

Plans to resume operations with up to five AB212s seem to still exist, although none have been noted flying in recent years. Maintenance work is being carried out though on at least one AB212 at Beirut Air Base.

Being cash-strapped, on your own and challenged gets one’s creativity stimulated. This is how this Puma gunship was developed. The modification was locally developed and includes the installation of two ADEN 30mm cannons (250 to 500 rounds) and two Matra SNEB 68mm rocket pods. The ADEN cannons originate from the withdrawn Hunters, while the SNEB was used by the Mirage IIIs the country once owned. The weapons control panel was also created locally, while a gunsight from an Alouette 3 was used to complete the system. Handmade carbon fiber covers are added to the cannons, as well as devices to catch the 30mm casings. Instead of the cannons and rocket pods the Puma can also carry two bombs on each side (two 1000lb bombs on the outer pylons and two 500lb bombs on the inner ones). It takes about two hours to remove the weapons rig and turn the Puma into a ‘normal’ one again. The Lebanese Puma gunship was heavily involved in the recent operation against ISIL.

Since the end of the civil war in Lebanon (from 1975 to 1990), the Lebanese Air Force has been seriously involved in two major operations.

In 2007 fighting broke out between the Lebanese Armed Forces and Fatah al-Islam. The Islamist militant group, operating out of the Nahr al-Bared (Palestinian) refugee camp, killed dozens of Lebanese military and civilians in May 2007, triggering the start of the conflict. Before the Lebanese government declared victory early September 2007, the Lebanese Air Force deployed Gazelles with HOT missiles and gunpods against hostile positions several times. More surprisingly, the UH-1H helicopters were modified to carry unguided bombs (Mk82 and Mk83) and rocket pods (Matra SNEB 68mm rocket pods). The absence of fixed wing aircraft led to the LAF and the engineering regiment figuring out how to mount this on a standard UH-1, effectively turning them into bombers and attack helicopters. The modifications were much needed to attack fortified bunkers.

In 2011 the civil war in Syrian spilled over to Lebanon. Between 2011 and August 2014 this led to several clashes and bombings within Lebanon. The Lebanese Armed Forces managed to more or less keep out of the conflict, but this changed in August 2014 during the battle of Arsal, where fighters from the al-Nusra Front and ISIL had taken control of the Lebanese town and surrounding areas, while capturing nine Lebanese soldiers. From August 2014 onwards, the LAF was involved in taking back control of Lebanese occupied areas. This culminated in the Qalamoun offensive in July and August 2017 when the Lebanese Armed Forces, Hezbollah and the Syrian Armed Forces all launched (non-coordinated) attacks on al-Qaida and ISIL on the border between Lebanon and Syria. This eventually led to a cease-fire between the LAF and ISIL on 27 August 2017.

The Lebanese Air Force played a major role in the 2017 offensive (named ‘Fajr al-Jouroud’). Attack helicopters were used (Gazelles and modified Pumas) and the three AC-208 Combat Caravans were heavily involved. Both with firing AGM-114 Hellfires at targets and designating targets for the M712 Copperhead 155mm laser-guided artillery shells. 4 Squadron prides itself on being able to operate the AC-208 Combat Caravans for a continuous period of 30 hours during the offensive. Impressive, considering the small number of aircraft and personnel available to the unit.

Despite the addition of the six A-29B Super Tucanos, the Lebanese Air Force is still a relatively small air force in an uncertain environment. Its assets all appear to be in a mint condition and it has recently proven several times to be able to adapt quickly to unstable operational circumstances. Almost forgotten by many countries in the world and still recovering from a civil war, that left the air force with hardly any equipment available, the Lebanese Air Force managed to perform when called upon.

Although the addition of the A-29s is welcomed, the remark made by the commander of the 81st Fighter Squadron at Moody AFB (during the completion of the first flight training by a Lebanese Air Force pilot on the A-29) is already obsolete; “These guys will be fully-trained operational combat pilots in the A-29 aircraft. The ultimate goal is for them to fight ISIS on their eastern border.” The LAF already sent them packing last year.

The A-29s are therefore now more a deterrence and a safeguard. Unless things change for the worse, the same goes for the MD530 that are still to be delivered and the additional six A-29s if they get delivered. 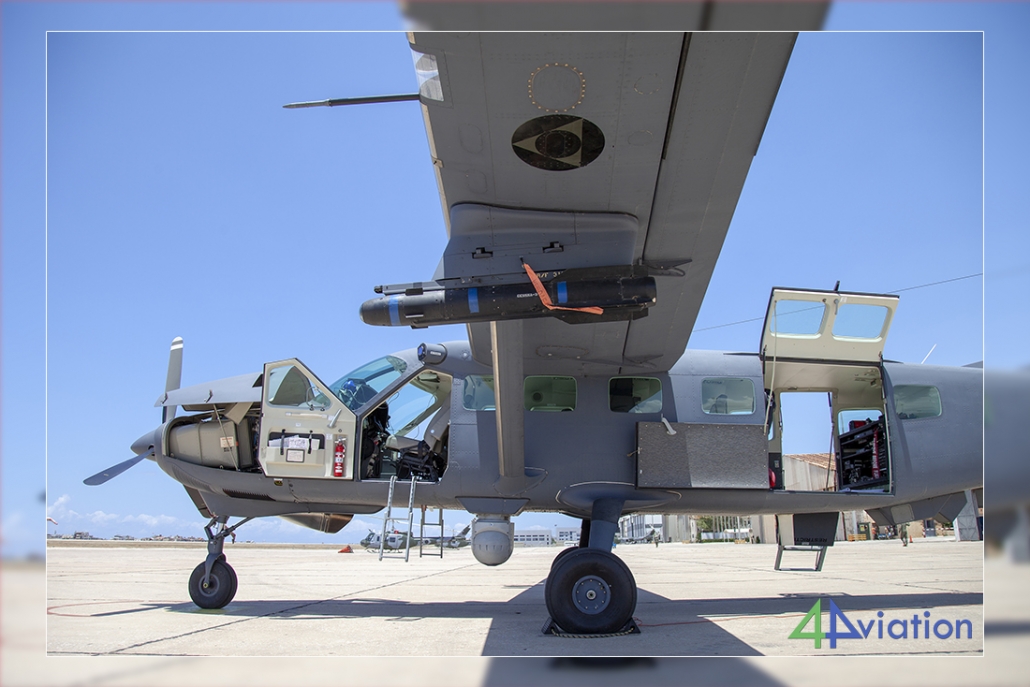 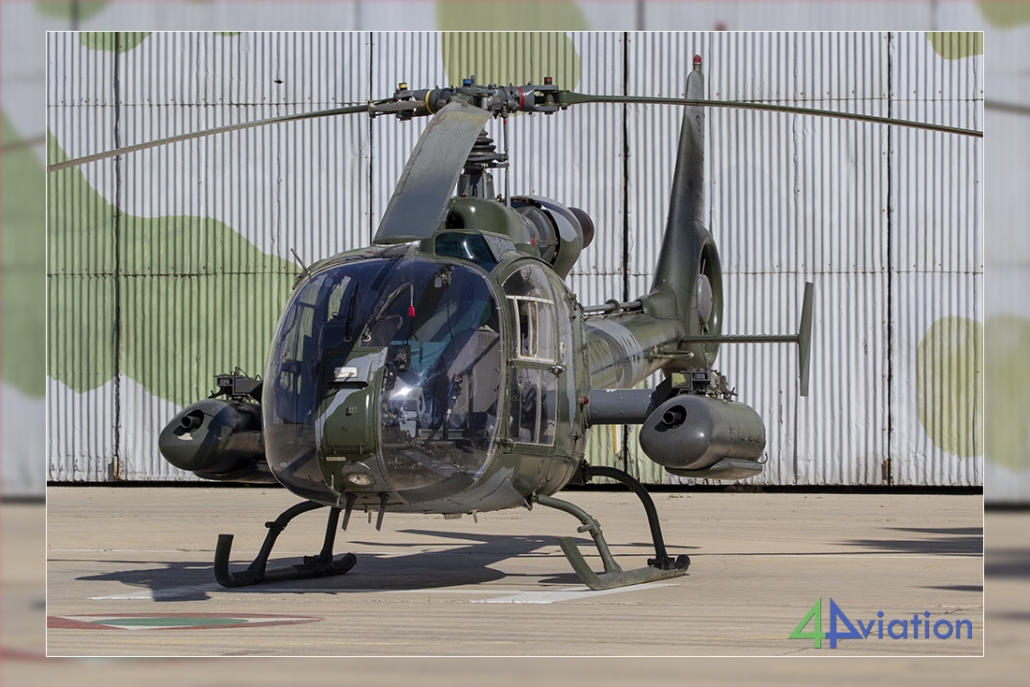